Home / Worship 101 / The Tabernacle of David – What God wants to build in the earth!

The Tabernacle of David – What God wants to build in the earth!

The Tabernacle of David – What God wants to build in the earth! October 25, 2015 Bridesong
Worship 101
0 Comment

The Tabernacle of David –

What God wants to rebuild in the earth!

Vision of the Heavenly Worship Room –

11 “In that day I will repair its broken walls
and restore its ruins—
and will rebuild it as it used to be,”  Amos 9:11 NIV

11  “In that day will I raise up the tabernacle of David that is fallen, and close up the breaches thereof; and I will raise up his ruins, and I will build it as in the days of old.“      Amos 9:11 KJV

It is interesting that God created everything we see from the majestic mountains to the depths of the oceans to the dense rain forests and every grain of sand in the desert as well as all life that inhabit these environments, and yet there is something God wants to build in the earth. Of all the beautiful cathedrals and monuments and palaces and architectural wonders, God wants to raise up a fallen tent. Interesting that man has built many things through inspiration, intellect, and technology, and yet God wants to build only one thing. And of all the sacred places from the Temple of Solomon to the palaces of David and Solomon and all the temples erected later, God wants to build the tabernacle of David as in days of old or as it used to be.

4 He appointed some of the Levites to minister before the ark of the Lord, to extol, thank, and praise the Lord, the God of Israel:  5 Asaph was the chief, and next to him in rank were Zechariah, then Jaaziel, Shemiramoth, Jehiel, Mattithiah, Eliab, Benaiah, Obed-Edom and Jeiel. They were to play the lyres and harps, Asaph was to sound the cymbals, 6 and Benaiah and Jahaziel the priests were to blow the trumpets regularly before the ark of the covenant of God.   1 Chronicles 16:1-2, 4-6

There were two elements present within the Tabernacle of David. First of all there was the Ark of the Covenant, where the Glory of God resided over the Mercy Seat. This was an earthly representation of the Heavenly Pattern, the Throne Room of Heaven and the One who sat on the Throne. The second element was the priesthood assigned to regularly worship with instruments and voices before the Ark of Glory. In the tradition of the previous tabernacle, only one, the High Priest himself, was allowed to go into the Holy of Holies, the place where the Ark of Glory resided, with the Glory hovering over the Mercy Seat. And there was always the threat of death if the high priest was not deemed worthy to approach the Most Holy place because of an imperfect or inadequate life.

However, David established this new type of worship ministry and new priesthood to regularly worship before the Ark for 33 years, every year of the life of the coming Messiah, Jesus Christ Himself. Not only was this an act of worship but an act of standing in the breech, intercession. And it is interesting to note that they enlisted scribes to record all of the Songs of the Lord that were birthed in the Heart of David and other prophetic minstrels in the priesthood as well as in their regular time of worship.

I am reminiscent of this type of boldness to approach such a holy place, and yet this was before the coming of the Messiah.

16 Let us therefore come boldly unto the throne of grace, that we may obtain mercy, and find grace to help in time of need.   Hebrews 4:16

These worshipping priests were regularly prepared and worshipped in this level of Glory, not in front of the masses and the audiences. There were no light shows and no applause, no programs and probably of a spontaneous and prophetic nature. So what was the fruit of this incredible worship legacy?

11 The priests then withdrew from the Holy Place. All the priests who were there had consecrated themselves, regardless of their divisions. 12 All the Levites who were musicians—Asaph, Heman, Jeduthun and their sons and relatives—stood on the east side of the altar, dressed in fine linen and playing cymbals, harps and lyres. They were accompanied by 120 priests sounding trumpets. 13 The trumpeters and musicians joined in unison to give praise and thanks to the Lord. Accompanied by trumpets, cymbals and other instruments, the singers raised their voices in praise to the Lord and sang:

“He is good;
his love endures forever.”

These musicians prepared before the Ark of Glory in the Tabernacle of David released a sound that released the tangible cloud of Glory and Fire of God from Heaven into an earthly dwelling place, taking residence Above the Mercy Seat. So intense was this Glory evidenced by the Cloud that filled the Temple as well as the fire that consumed the sacrifices, the priests could not perform their service nor enter the Temple because of that Glory.

Are we seeing this level of Glory and tangible Cloud filling the sanctuary that no one can minister or even enter past it?

I believe that not only will we see it in our lifetime in the Church, but we will see an even greater manifestation of it, as promised in His Word. After all, isn’t the Father seeking worshippers who will worship Him in Spirit and in Truth?

Yet a time is coming and has now come when the true worshipers will worship the Father in the spirit and in truth, for they are the kind of worshipers the Father seeks.   John 4:23 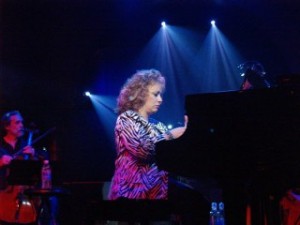 Raelynn at the Grand Piano, releasing the Bride Song.

See you in the Throne Room,